The Value of an API

What follows is an email thread from a mailing list. The question is asked very well and it helps explain the power of NicTool.

On Oct 3, 2004, at 5:11 AM, Erik at MicroController dot nl wrote:
>> It's a nice interface for your tinydns data file,. but you still have to
>> know a lot about dns records to use it I think. It doesn't simplify dns
>> management, or does it?
>
> Oh ye of little faith. :-) You are looking only at NicToolClient. You are
> not limited by the client, that's just the "included" web interface.
>
>> When I wrote MySMT www.mysmt.net, I simplified the dns managment to
>> adding a domainname. All records will be set to default values, and only
>> A and MX records can be changed by normal users:
>> http://www.mysmt.net/index.php?site=dns
>
> And do you think that I have never had such a need? Such is the power of
> NicTool's API. When I ran into this very same situation, I wrote a quick
> perl script that presents a HTML form the to end user: 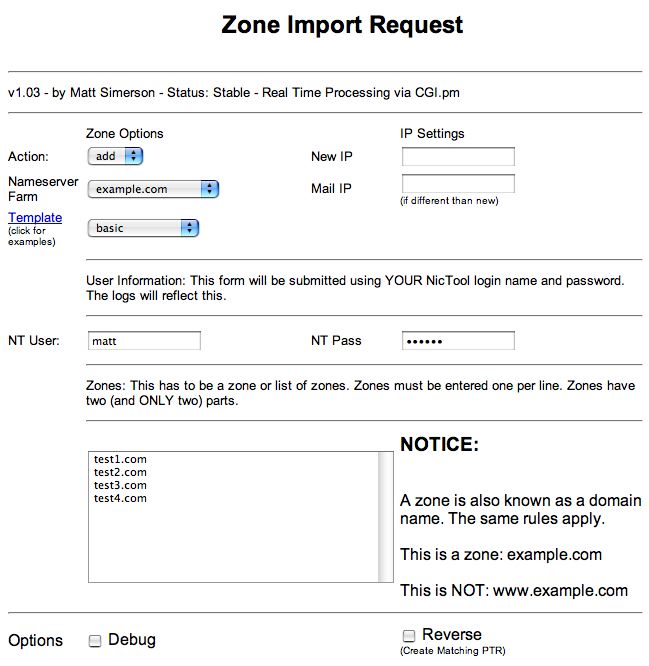 > We used this form all the time, especially for resellers. They'd want to
> update all the DNS for all 55 zones they'd have on their dedicated box.
> Rather than having someone in tech support make the change 55 times,
> they'd cut-n-paste the zone list into the HTML box, insert the New IP
> into that field, pick the DNS template they wanted to use, and voila.
>
> Such is the power of having an API.
>
> Similarly, instead of having our provisioning system have to create
> the zones and then the records, it would connect and merely pass along
> something like this:

> I'd make sure it all got done with my abstraction layer and thus
> keep the monkeys in IT from ever interacting with directly with my
> DNS data. :-)
>
> Matt

the obvious things like "ya know, i could write something to do this and save a lot of time".

6 weeks of caffeine and raster burn driven code because something doesn't exist? no problem.

manually updating 2734 zone files because you changed providers and have a different class c? not a chance.

i have yet to see him code himself into a corner, and i appreciate that.

i just moved all of my domains to godaddy. not because of the price, but because of the ease of doing batch stuff. change all the dns servers for all domains? piece of cake.

i have a client that was paying 6 people for 2 months to organize their print catalog and turn it into pagemaker files.

we spent a week, wrote a perl script that goes from their booklog database to ready-for-the-printer pagemaker files. takes 20 minutes to run.